Oh to be at Sybil now that April’s here…at Sybil’s 34th running, Carmel, NY on 21st April 2012. A perfect spring day with blue sky and puffy white clouds greeted about 50 runners for the annual jaunt around the single big loop through Putnam county on Saturday.

Aaron Heath, second last year to an excellent Sheldon-Smith in chilly conditions, liked the spring warmth, improved his time by two minutes and took the win in 3:37.

Tomasz Kochanowicz pounded in 3 1/2 minutes behind Aaron. Tom seems to be a newcomer to the NY area but a little research shows an impressive record of first and second places in Southern states. Tom’s strong effort over Sybil’s challenging hills and rustic roads will earn him additional respect. Furthermore, it was done in quite serene fashion – quite unusual to a newcomer to the course,

In third place came Phil McCarthy, sporting a new haircut (which looked to me like what I would call a “prince valiant”). Perhaps the new haircut denotes a new attitude for friendly and unassuming Phil. Last May, Phil set a new national record for the 48 hour run, covering 257 miles and breaking John Geesler’s record of 248 miles from 2003. Let me do the math for you. His run works out at 5.35 mph, 11:12 minutes per mile for two full days and nights. No snooze stops, no timeouts of any kind. An incredible record, a wonderful effort! A blast on the trumpet for musician Phil! Phil is scheduled to try again this May at the Three Days at the Fair in New Jersey.

Among the other runners we should take special note of the first place woman, young Emmy Stocker, who produced a solid 4:53 to easily lead a handful of mostly much younger women. Emmy has completed an incredible body of successful ultras ranging from 50 km’s up to, and including, several 100 mile races. In the last ten years, Ultrasignup has counted Emmy completing 66 ultra events. She also has a fine record at Sybil but only one previous win, in 2007, when Emmy was delighted to take advantage of the absence of Ellen McCurtin. We recall that Ellen (now mostly retired but making a welcome return this year in the relay) reigned supreme with an unbroken string of 9 women’s wins.

We also note Grant McKeown who won the Sy Mah award for the first place 60 +. Grant’s win was especially sweet, not only for Grant but for many other runners who count him as a friend because he had earlier announced that he was running the event in honor of his mother who had passed on short weeks before the race. “I am running today in celebration of my mom”, said Grant. Indeed, it was a celebration which was shared by all those at the race. It was well done Grant! 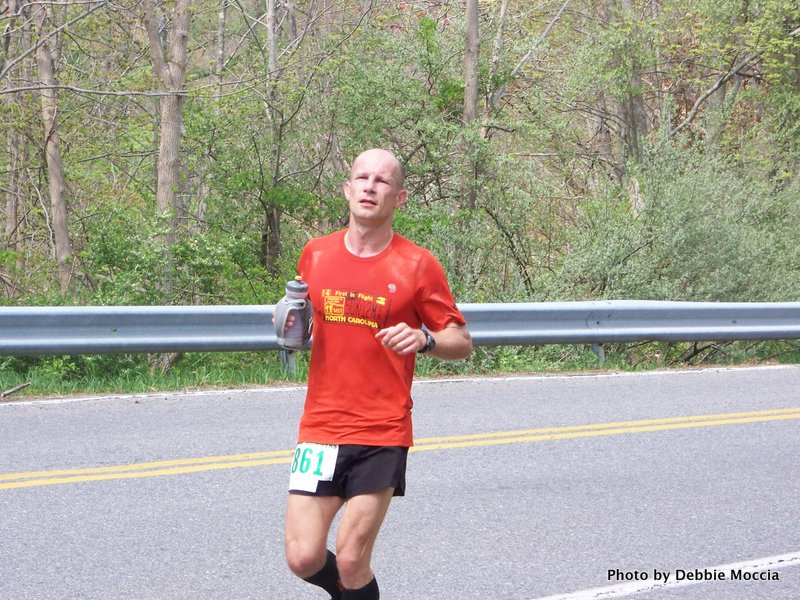 I must not forget the 2-person relay which is arranged to keep speedy young racers, a spare spouse, children over 18 or aged parent busy while the main event takes place. This year was its 20th anniversary. It starts one hour after the the 50km and allows 6 hours for completion. Three teams competed on Saturday. The winning team was Hans Put and Ellen Mccurtin, both fine ultrarunners and veterans of the Comrades race in South Africa. Their winning time was a sedate 4: 09. The complete relay results appear with the 50km results on the Taconic Road Runners Club website:https://runner.org/

Sybil is one of the oldest ultras in North America, having put 34 consecutive years behind her. Actually she ranks about 6-8 th on the list which nowadays totals more than 600 ultra events annually. This year the organizers tried to remind participants of the many notable runnerswho have run Sybil since 1979 when the race made its debut. An exhibit, posted with other Sybil memorabilia, listed 20 runners of Sybil who have gone on to national prominance. Here they are, roughly in order of their Sybil participation: Jack Bristol, Bill Lawder, Cahit Yeter, Terry Knickerbocker, Jim Shapiro, Stu Mittleman, Phil McCarthy, Bob Sweeney, Byron Lane,, Mike Arnstein, Glen Redpath, David Luljak, Al Prawda, Dave Dunham, Trishul Cherns, David James, and women too; Donna Hudson, Daniele Cherniak, and Ellen McCurtin.

Some of them were back last Saturday: Phil McCarthy, Byron Lane, Al Prawda, Trishul Cherns, and Ellen McCurtin (running in the two-person relay). It was great to see them, again testing themselves on Sybil’s hills.

Life is all about the journey, isn’t it? Ultra runners know all about that .I’ll leave you with a kind of signpost – one which occurs on Sybil’s course. At a certain point, actually at about 22.8 miles, the junction where you bear right as you leave the asphalt of Peckslip for the dirt of Church Hill, there to your left is a tiny cemetery. There lies famous bestseller author of “The Complete Book of Running”, James Fixx. Born 23 April 1932.
Died 20 July 1984. Age: 52

Well hello March! It must be mud season. So get of

Registration for our annual St. Pat’s race is mo